The world generates 2.01 billion tonnes of municipal solid waste annually, with at least 33 percent of that—extremely conservatively—not managed in an environmentally safe manner. Worldwide, waste generated per person per day averages 0.74 kilogram but ranges widely, from 0.11 to 4.54 kilograms. Though they only account for 16 percent of the world’s population, high-income countries generate about 34 percent, or 683 million tonnes, of the world’s waste.

When looking forward, global waste is expected to grow to 3.40 billion tonnes by 2050, more than double population growth over the same period. Overall, there is a positive correlation between waste generation and income level. Daily per capita waste generation in high-income countries is projected to increase by 19 percent by 2050, compared to low- and middle-income countries where it is expected to increase by approximately 40% or more. Waste generation initially decreases at the lowest income levels and then increases at a faster rate for incremental income changes at low income levels than at high income levels. The total quantity of waste generated in low-income countries is expected to increase by more than three times by 2050. The East Asia and Pacific region is generating most of the world’s waste, at 23 percent, and the Middle East and North Africa region is producing the least in absolute terms, at 6 percent. However, the fastest growing regions are Sub-Saharan Africa, South Asia, and the Middle East and North Africa, where, by 2050, total waste generation is expected to more than triple, double, and double respectively. In these regions, more than half of waste is currently openly dumped, and the trajectories of waste growth will have vast implications for the environment, health, and prosperity, thus requiring urgent action. 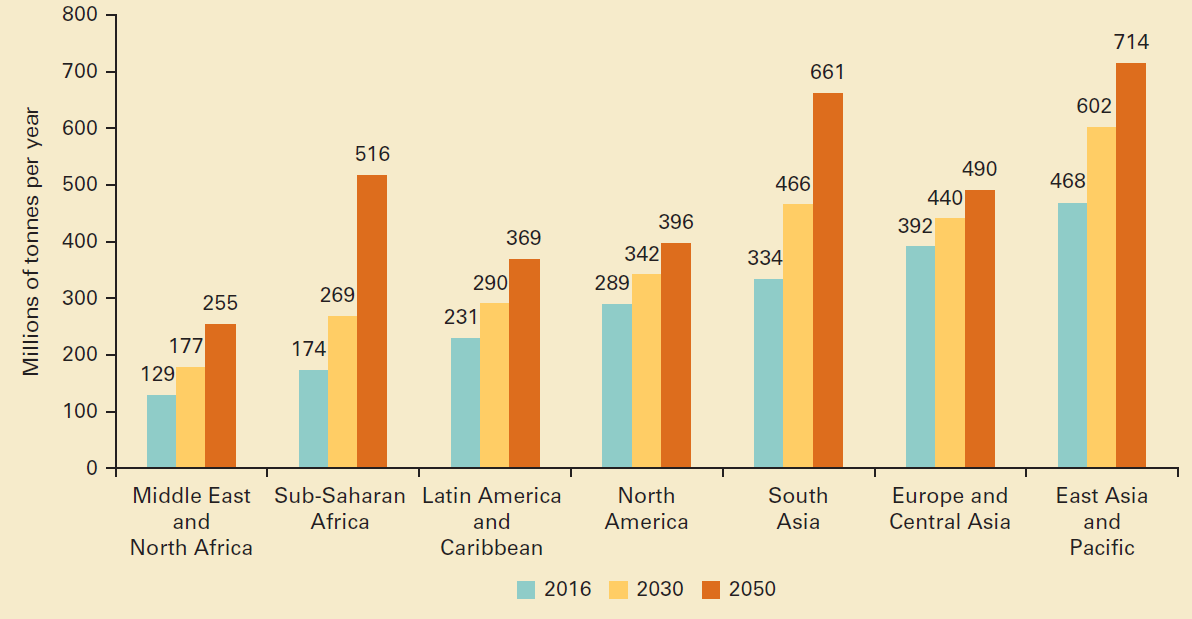 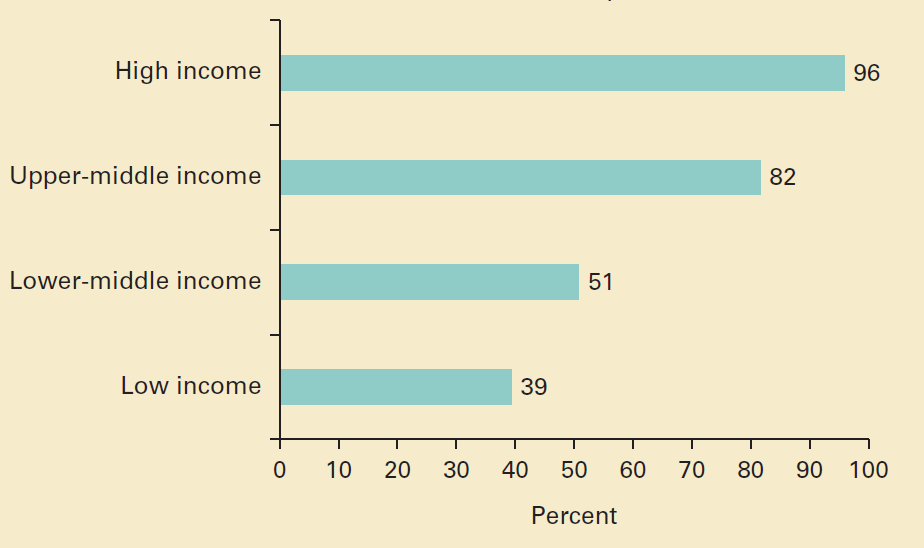 Waste composition differs across income levels, reflecting varied patterns of consumption. High-income countries generate relatively less food and green waste, at 32 percent of total waste, and generate more dry waste that could be recycled, including plastic, paper, cardboard, metal, and glass, which account for 51 percent of waste. Middle- and low-income countries generate 53 percent and 57 percent food and green waste, respectively, with the fraction of organic waste increasing as economic development levels decrease. In low-income countries, materials that could be recycled account for only 20 percent of the waste stream. Across regions, there is not much variety within waste streams beyond those aligned with income. All regions generate about 50 percent or more organic waste, on average, except for Europe and Central Asia and North America, which generate higher portions of dry waste.

It is a frequent misconception that technology is the solution to the problem of unmanaged and increasing waste. Technology is not a panacea and is usually only one factor to consider when managing solid waste. Countries that advance from open dumping and other rudimentary waste management methods are more likely to succeed when they select locally appropriate solutions. Globally, most waste is currently dumped or disposed of in some form of a landfill. Some 37 percent of waste is disposed of in some form of a landfill, 8 percent of which is disposed of in sanitary landfills with landfill gas collection systems. Open dumping accounts for about 31 percent of waste, 19 percent is recovered through recycling and composting, and 11 percent is incinerated for final disposal. Adequate waste disposal or treatment, such as controlled landfills or more stringently operated facilities, is almost exclusively the domain of high- and upper-middle-income countries. Lower-income countries generally rely on open dumping; 93 percent of waste is dumped in low-income countries and only 2 percent in high-income countries. Three regions openly dump more than half of their waste—the Middle East and North Africa, Sub-Saharan Africa, and South Asia. Upper-middle-income countries have the highest percentage of waste in landfills, at 54 percent. This rate decreases in high-income countries to 39 percent, with diversion of 36 percent of waste to recycling and composting and 22 percent to incineration. Incineration is used primarily in high-capacity, high-income, and land-constrained countries. 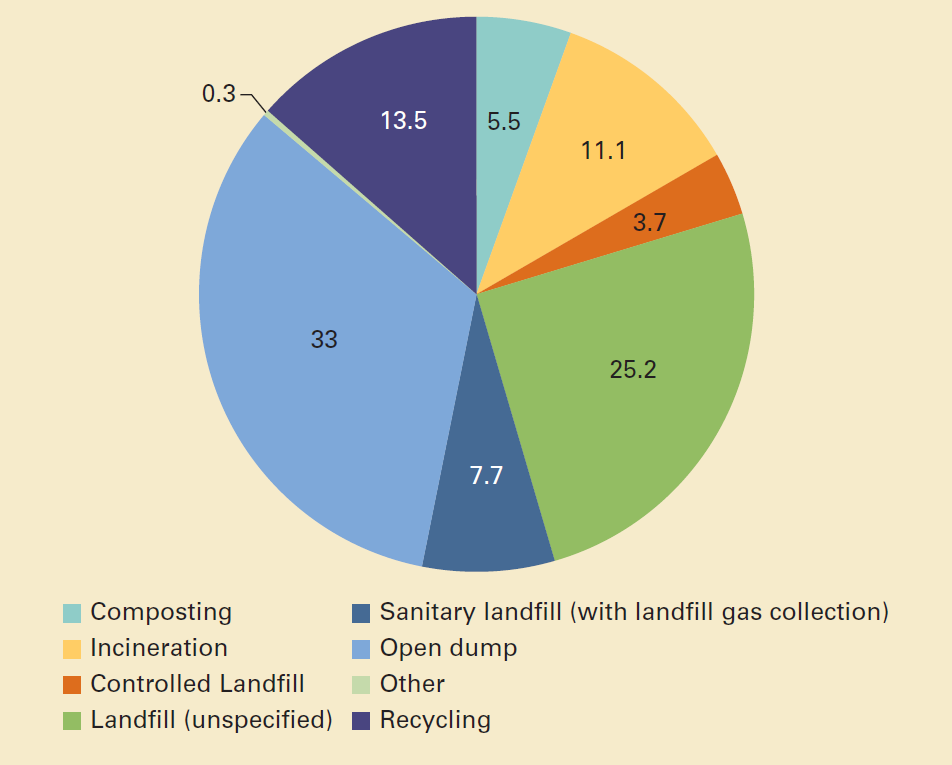 Based on the volume of waste generated, its composition, and how it is managed, it is estimated that 1.6 billion tonnes of carbon dioxide (CO2) equivalent greenhouse gas emissions were generated from solid waste treatment and disposal in 2016, or 5 percent of global emissions. This is driven primarily by disposing of waste in open dumps and landfills without landfill gas collection systems. Food waste accounts for nearly 50% of emissions. Solid waste–related emissions are anticipated to increase to 2.38 billion tonnes of CO2-equivalent per year by 2050 if no improvements are made in the sector.

In most countries, solid waste management operations are typically a local responsibility, and nearly 70 percent of countries have established institutions with responsibility for policy development and regulatory oversight in the waste sector. About two-thirds of countries have created targeted legislation and regulations for solid waste management, though enforcement varies drastically. Direct central government involvement in waste service provision, other than regulatory oversight or fiscal transfers, is uncommon, with about 70 percent of waste services being overseen directly by local public entities. At least half of services, from primary waste collection through treatment and disposal, are operated by public entities and about one-third involve a public-private partnership. However, successful partnerships with the private sector for financing and operations tend to succeed only under certain conditions with appropriate incentive structures and enforcement mechanisms, and therefore they are not always the ideal solution.

Financing solid waste management systems is a significant challenge, even more so for ongoing operational costs than for capital investments, and operational costs need to be taken into account upfront. In high-income countries, operating costs for integrated waste management, including col-lection, transport, treatment, and disposal, generally exceed $100 per tonne. Lower-income countries spend less on waste operations in absolute terms, with costs of about $35 per tonne and sometimes higher, but these countries experience much more difficulty in recovering costs. Waste management is labor intensive and costs of transportation alone are in the range of $20–$50 per tonne. Cost recovery for waste services differs drastically across income levels. User fees range from an average of $35 per year in low-income countries to $170 per year in high-income countries, with full or nearly full cost recovery being largely limited to high-income countries. User fee models may be fixed or variable based on the type of user being billed. Typically, local governments cover about 50 percent of investment costs for waste systems, and the remainder comes mainly from national government subsidies and the private sector.